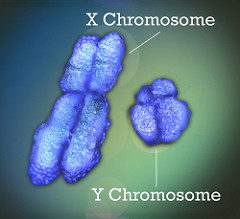 Most of us can agree that summer months often feel fun and lighthearted. But each year, July serves a serious purpose, too: it is Fragile X awareness month. Fragile X is a genetic condition that causes intellectual disability and some physical changes. It typically affects males more often and more severely than females. To better understand this X-linked disorder, let’s take a closer look at sex-linked conditions: What are they? How do they differ from autosomal disorders? Why do they have varying effects on males and females?

Each human cell contains 46 chromosomes, which come in 23 pairs. Chromosomes contain our genes. For the first 22 pairs of chromosomes, known as the autosomes, males and females have two copies of each gene, one from mom and one from dad. To have an autosomal dominant disorder, an individual must inherit at least one mutated copy of a specific gene. To have an autosomal recessive disorder, an individual must inherit two mutated copies of a specific gene. Autosomal disorders, whether they be dominant or recessive, affect males and females alike.

Known as the sex chromosomes, the 23rd pair is where males and females differ genetically: Females inherit two X chromosomes, one from each parent, while males inherit one X chromosome from their mother and one Y from their father. Though the X and Y chromosomes have some similar regions, they vary in size, shape, and gene content. Because of this genetic difference between males and females, sex-linked disorders affect the sexes at varying frequencies and severities.

With two copies of all X-linked genes, females develop X-linked disorders less frequently than males. If a female inherits a mutated copy of a gene found on the X chromosome, chances are she inherited a working copy of the gene from the other parent. In that scenario, the female would not be affected by the disorder, but there is a chance she could pass down the genetic change to a child. On the other hand, it’s unlikely for males to be carriers of an X-linked condition without showing symptoms of the disorder. Because males do not have a second X chromosome, one mutated copy of a gene on the X chromosome can result in severe phenotypic consequences.

Fragile X syndrome, the sex-linked focus of this month, affects approximately 1 in 4,000 males and 1 in 8,000 females.1 The disorder occurs when specific mutations arise in the FMR1 gene, which is located on the X chromosome. FMR1 mutations are the most commonly known genetic cause of intellectual disability and of autism spectrum disorders,2  and they also cause abnormal physical characteristics. Though no cure for Fragile X syndrome exists, early intervention and treatment can help manage symptoms.

In honor of this year’s Fragile X awareness month, I challenge you all to keep learning about this disorder and spread awareness to others. Together we can become more informed about our genes and our health, and we can help protect the health of future generations.

Have further questions? Contact our genetic counselor at the Sarnoff Center for Jewish Genetics for more information.

The Norton & Elaine Sarnoff Center for Jewish Genetics is a supporting foundation of the Jewish United Fund, and is supported in part by the Michael Reese Health Trust.